WINTER 2021
VIRTUAL EVENT: Registration Required https://go.lehigh.edu/bookclub
Once registered, you will be emailed a ZOOM Link.

The Humanities Center Book Club in January 2021for Undergraduates and their Families!

The Humanities Center will host a book club in January 2021 on Emily St. John Mandel's Station Eleven, a novel about how the arts and humanities sustain community in the aftermath of a devastating pandemic. It's a fantastic book, particularly relevant to our present moment. We invite any interested Lehigh undergraduates to join, either on their own or with a family member. Students and their families will need to purchase their own copies of the book, but the book club itself will be free. Sessions of 10-12 participants will be facilitated by Lehigh humanities faculty and graduate students. In addition, the Humanities Lab will host a panel--open to the community--on arts and humanities perspectives on pandemics.  Please use this link to register: https://go.lehigh.edu/bookclub  Once registered, you will be emailed a ZOOM Link.
Book Synopsis
Set in the days of civilization's collapse, Station Eleven tells the story of a Hollywood star, his would-be savior, and a nomadic group of actors roaming the scattered outposts of the Great Lakes region, risking everything for art and humanity.
One snowy night a famous Hollywood actor slumps over and dies onstage during a production of King Lear. Hours later, the world as we know it begins to dissolve. Moving back and forth in time—from the actor's early days as a film star to fifteen years in the future, when a theater troupe known as the Traveling Symphony roams the wasteland of what remains—this suspenseful, elegiac, spellbinding novel charts the strange twists of fate that connect five people: the actor, the man who tried to save him, the actor's first wife, his oldest friend, and a young actress with the Traveling Symphony, caught in the crosshairs of a dangerous self-proclaimed prophet. 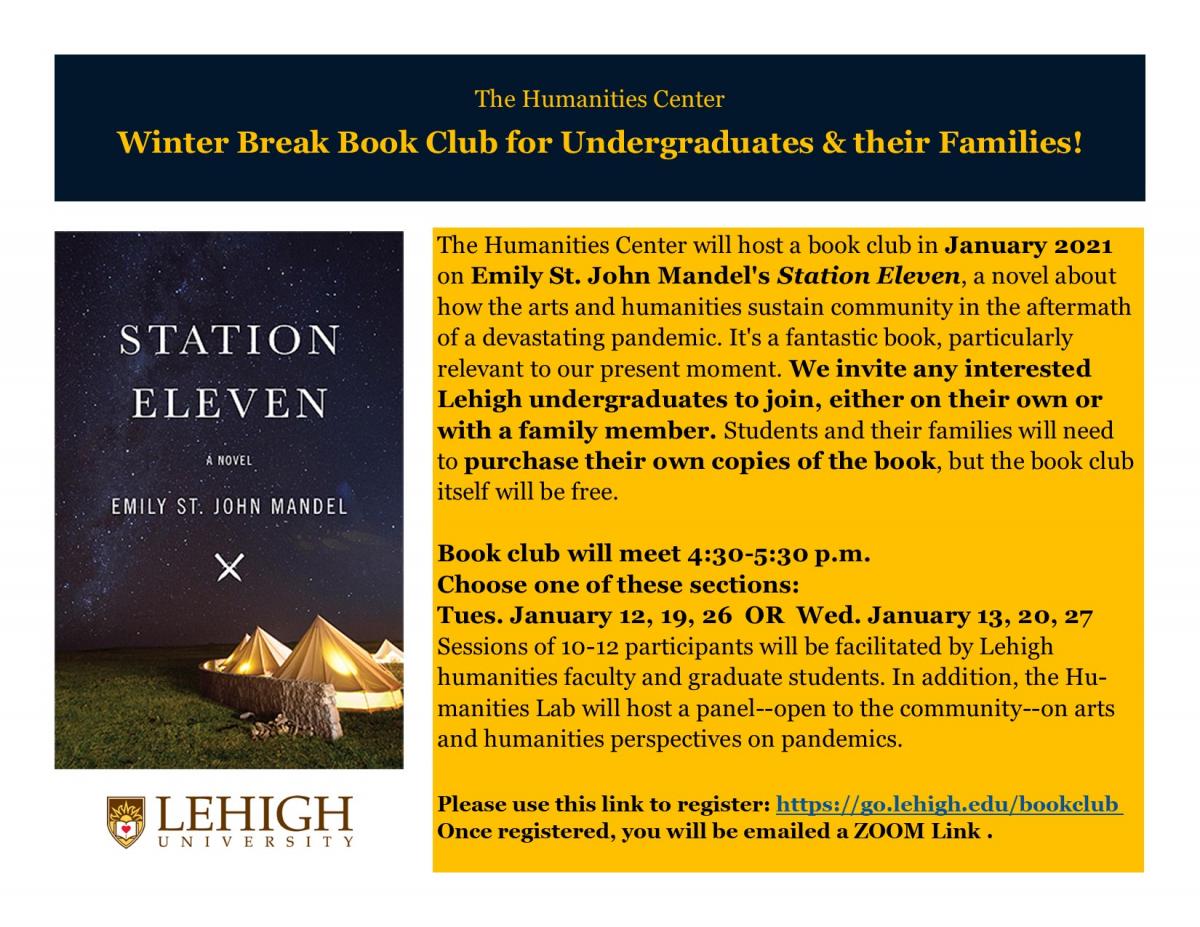 Humanities Center Lunchtime Salon: Race, Caste and the State
The Humanities Center invites interested parties to participate in a lunchtime discussion of sections of Isabel Wilkerson’s new book, Caste: The Origins of Our Discontents (2020). The salon will be held Friday, November 20, from 12:00-1:30PM.

This will be the first of a two-part series of events around the theme of systemic racism and the state. Our second event will be held during the Spring 2021 semester.

Facilitated by Emily Pope-Obeda (History) and John Vilanova (Journalism & Communication/Africana Studies), the sessions will engage with structures such as policy, labor,  and citizenship in the active making and codification of race, specifically discussing the ways racial others have been constructed. Participants will be invited to read selections from the book and come prepared to discuss them. We hope to create a discussion-centric space where faculty from a wide range of disciplines can bring their insights to the conversation.

Caste: The Origins of Our Discontents is a major new work of cultural studies produced by Wilkerson, who won the Pulitzer Prize in 1994 and published The Warmth of Other Suns: The Epic Story of America's Great Migration (2010) to similar acclaim. Caste, which has garnered wide attention, offers incisive and important new ways of theorizing race (and anti-Black racism specifically) in America.

Please register here for the Nov 20th discussion. Once you register, we will send you the pdf of the readings. This event is open to all university community members who are interested.

W.E.B. Du Bois and the Origins of Public Humanities
Roopika Risam, Associate Professor at Salem State University
Author of "New Digital Worlds: Postcolonial Digital Humanities in Theory, Praxis, and Pedagogy"
Thursday, October 29 | 12:10-1:25 p.m.
Sponsored by the Mellon Humanities Lab
2019-2020 Humanities Center Events
SPRING 2020
These events are now on ZOOM. Please email Kathleen Kapila, kathleen@bradburysullivancenter.org for link(s).
LGBT COMMUNITY READING GROUP SERIES 2020
January 21 | February 18 | March 17 | April 21 | May 19 | June 16
Sponsored by: Bradbury-Sullivan LGBT Community Center, Lehigh University’s Humanities Center, and South Side Initiative
Facilitated by Professor Mary C. Foltz, Associate Professor, English Department, Lehigh University
The community reading group invites you to join us to discuss an award-nominated LGBTQ memoir each month. Our conversations allow us to reflect upon major topics in LGBTQ communities, discuss our own experiences as they connect or diverge from the memoir, and engage with impactful books that are starting national discussions. Books are provided free of cost to the first ten people to sign up with Kathleen Kapila, kathleen@bradburysullivancenter.org!
This group will meet from 6:30-8:00 p.m. at the Bradbury-Sullivan LGBT Community Center, 522 West Maple Street, Allentown, PA 18101.
Humanities Center Trans*Studies Symposium
March 5 | 4:30 p.m. | Linderman Library, Scheler Humanities Forum, Room 200
Trans*Archives
Jack Halberstam, Professor of English and Gender Studies, Columbia University
In his brilliant, humorous and whimsical parody of a Smithsonian book titled American History in 101 Objects, artist Chris E. Vargas, in 2015, invited visitors into his imaginary Museum of Transgender Hirstory to see a show titled Transgender Hirstory in 99 Objects. Riffing on the self-importance of the Smithsonian title, the precision of its 101 objects and its investment in the notion of authentic history in the first place, Vargas called attention to the way that a history of gender variance will necessarily fall by the wayside in any canonical account of American history and will require its own object lessons. The objects that collectively tell the story of gender variance are counter-intuitive and suggestive, risqué and emblematic. For Vargas’s show, the objects ranged from queer banners by Tuesday Smilie to sculptures of hybrid creatures and photographic records of transgender lives gone by. What Transgender Hirstory in 99 Objects made clear, however, was that  trans* histories, which have been narrated as a record of pathology, dysphoria and trouble need their own archive in order to remove themselves from the medical history of disorder. This talk offers its own version of trans* history through a series of objects and archives ranging from photo albums to films, paintings and performances.
Working in the Age of Uncertainty
March 17 | 4:30 - 6:00 p.m. | Bethlehem Area Public Library, Southside Branch
A free, public discussion about economic and environmental insecurity.
Why do so many working families feel uncertain about our jobs, income, and basic life necessities? How do today's employers shift the burden of risk onto their employees? What impact does this have? And more importantly: what can we do about it?
Two short readings available in advance at: wordpress.lehigh.edu/tacklingtina
Light Refreshments Provided
Tackling T.I.N.A. Imagining Economic Alternatives
Sponsored by:
Humanities Center, Lehigh University
*Center for Ethics, Lehigh University
BETHLEHEM AREA PUBLIC LIBRARY Leaniing Starts Here
* The Center for Ethics is funded in part by the ENDOWMENT FUND for the TEACHING of ETHICAL DECISION-MAKING.
CANCELLED It Might Get Loud Music Film in Concert and Conversation
March 19 | 4:30 p.m. Humanities Center
Aretha Franklin's Amazing Grace
Hosted by John Vilanova, Professor of Journalism, Lehigh University and Rolling Stone writer

Humanities Center Antibiotic Resistance Seminar with the Office of the Vice President for Research and Graduate Studies
November 4 | 6:00 p.m. | STEPS 280
The Anthropocene in/of the Cell: Antibiotic Resistance and the History of Industrialization
Hannah Landecker, Department of Sociology and Director, Institue for Society and Genetics, UCLA
Lorenzo Servitje, Moderator, Assistant Professor of English, Lehigh University
The Anthropocene, being a concept that comes to us from geology and climate science, is generally seen in relation to material evidence gathered from the rock strata, marine sediments, and glacier ice. It is a concept of macro scales, carbon economies, epochs and world systems. This talk goes small instead, and reads biological and biochemical narratives to examine the idea of an Anthropocene in, or of, the cell. Drawing on specific examples of the industrial production of pharmaceuticals and pesticides, I show how microbial cells have changed to adapt to the biochemical environments generated during and after World War II by a growing chemical industry, shifts in medical protocols, and changing hygiene practices. Rather than the organism in sediment during historical time, I consider the organism as sedimentation of historical time: a repository of metabolic strategies for navigating novel chemical milieu after industrialization. From this perspective, the insides of cells can be seen as microscopic landscapes in their own right, in which the products of industrialization alter the biophysical and architectural character of molecular life, affecting the flow of mobile genetic elements, the dynamics of microbial community life, and the very nature of human-microbe relationships.